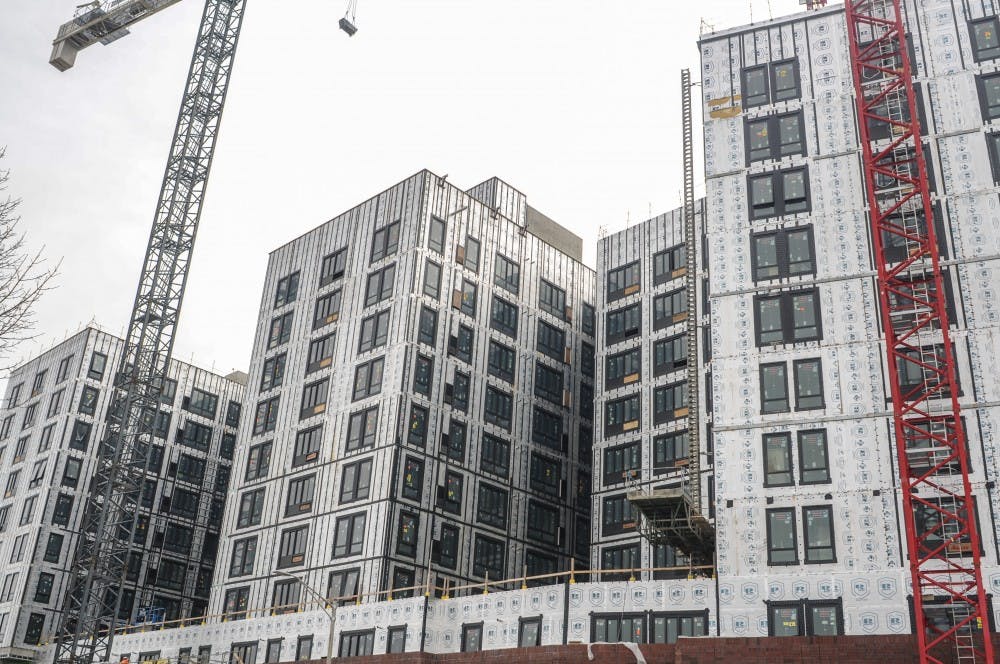 The Hub construction on April 4, 2019. Annie Barker | The State News

The real-estate firm behind The Hub informed East Lansing officials it has acquired two neighboring properties on Bogue Street with an intent to build two more student housing towers.

East Lansing Mayor Mark Meadows "indicated to us that a proposal was given to him to build two towers on opposite sides of Farmhouse,” Nguyen said. “They would basically be The Hub 2.0 and 3.0.”

Developer Core Spaces' development request includes four properties along Bogue Street, although attorney David Pierson reports the company has only purchased two. Pierson did not say which properties were acquired.

Core Spaces has yet to submit site plans or anything else representing a formal proposal, according to Meadows.

Alexander Furtaw, Vice President of Finance for Alpha Sigma Phi, said he wasn’t aware of the development until Nguyen mentioned it at an Inter-Fraternity Council meeting.

“As far as I know, CRMC still owns the properties,” he said.

Furtaw said the lease for Alpha Sigma Phi, at 131 Bogue St., lasts for at least another two years. He is confident the lease will be upheld in full.

“I think it would be a shame to demolish several historically relevant properties that have been owned by fraternities for years,” he said.

Meadows said due to CRMC's size, it would be odd if there has been no communication between the company and the fraternities.

He said in property agreements, developers often receive ownership contingent on approval of a specific project. This conditional agreement would allow CRMC to keep the properties if plans for the development failed.

CRMC owns every off-campus property on Bogue Street except for Farmhouse, according to Nguyen.

Before construction could begin, Core Spaces would have to pass through the city's bureaucratic process.

The East Village Master Plan was adopted in 2008 and requires 50 percent of residential units to be owner-occupied in any development in the area.

The city code requires new developments to be mixed-market rental units, including a mix of studio, one-bedroom, two-bedroom and three-bedroom units. The building must be no more than eight stories tall, and a maximum of 25 percent of units can have three bedrooms.

“That really is intended to make sure student housing doesn’t happen,” Pierson said.

Pierson said the development plans include four-bedroom units on a building exceeding the height limit, so as to provide affordability for students and reduce construction costs of kitchens for residential units.

Changes to the city code would have to be approved by the East Lansing City Council before the development concept could be considered.

Meadows said he has received pressure to move as soon as next week on an ordinance to revise zoning laws surrounding East Village. The mayor said he was opposed to the changes. He said the issue would likely be brought up in a discussion-only city council meeting April 16.

Council member Aaron Stephens said he wanted to wait to see site plans before he gave a formal opinion.