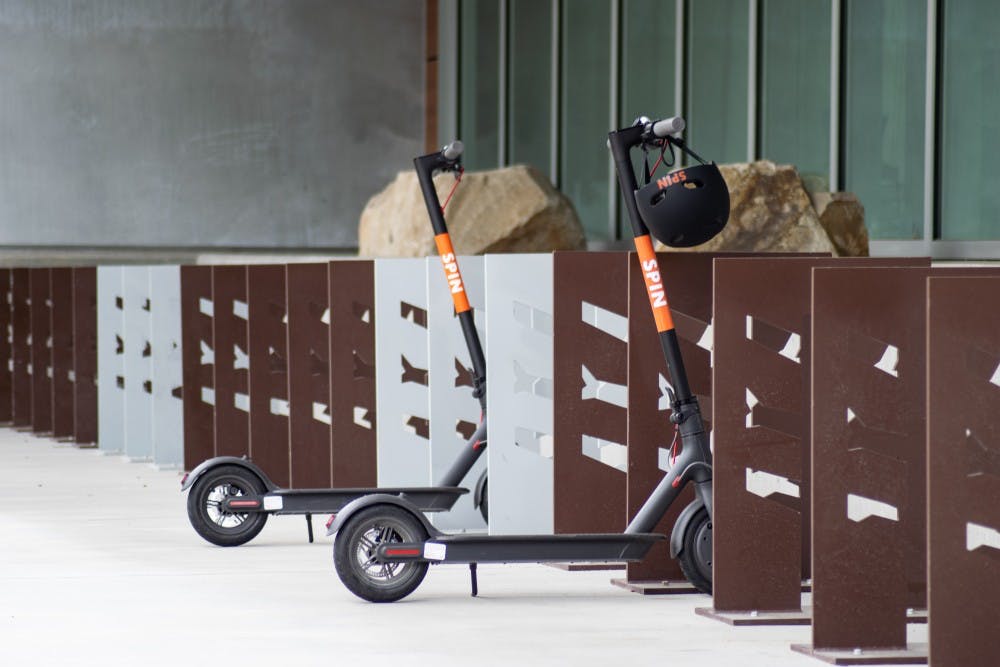 Spin currently operates on seven campuses and in nine cities nationally, including Detroit.

Frank Speek, Spin’s government partnerships manager, said the company has had conversations with Michigan State about operating on campus. Speek said he was also interested in the Lansing and East Lansing markets for ridership.

Part of Spin's approach, Speek said, is the company does not operate in cities without permission from local officials. This means Spin wouldn’t arrive until after the council passes an ordinance to codify safety regulations and set up a standard licensing agreement with companies.

Speek said he believes that method of operation is the best to ensure community safety.

“We really take a proactive approach in working with the local units of government,” he said. The scooter industry is “like the Wild West. The user education is bare, because the rules haven’t been implemented.”

Some regulations Spin wants to see in East Lansing include caps on the number of scooters and vendors, he said. Such a cap would ensure safety and contribute to increased public acceptance of scooters as a method of travel.

“You’ll have vendors come in where a city doesn’t have a cap and they will just deploy 1,500 scooters, and the market is way oversaturated,” he said. "It’s basically like street furniture.”

City Manager George Lahanas agrees that too many scooters on the streets could pose a problem.

“We want the right number so people are using them responsibly, putting them somewhere they should be,” he said.

But there’s no plan to limit the number of scooters and vendors, as long as they don't create an undue burden for the city, Lahanas said.

“At this point, we don’t necessarily envision a limit on the number of vendors, because if people want to compete, they can come compete,” Lahanas said.

Regulations on the scooter industry have yet to be finalized by the city council, but councilmembers began the next phase of discussion in their Feb. 19 meeting.

One possible rule to address the number of scooters is a per-day, per-scooter fee. This would require scooter companies to pay $1 daily for each scooter within city limits.

Lahanas said an advantage of this plan is that excess, unused scooters would still cost companies money, giving them incentive to not leave the scooters lying around.

Spin is interested in complying with safety education and enforcement mandates that could be established by the city, Speek said.

Speek said Spin’s app displays local regulations to users before they can sign up for an account and requires users to verify the scooter was properly parked at the end of their ride.

“If we have a certain account that’s constantly getting negative reviews and routinely breaking the law, we have the ability to cancel that person’s account,” Speek said.

“We would love to partner with them and try and bring those benefits that the program could offer to the community,” Speek said.