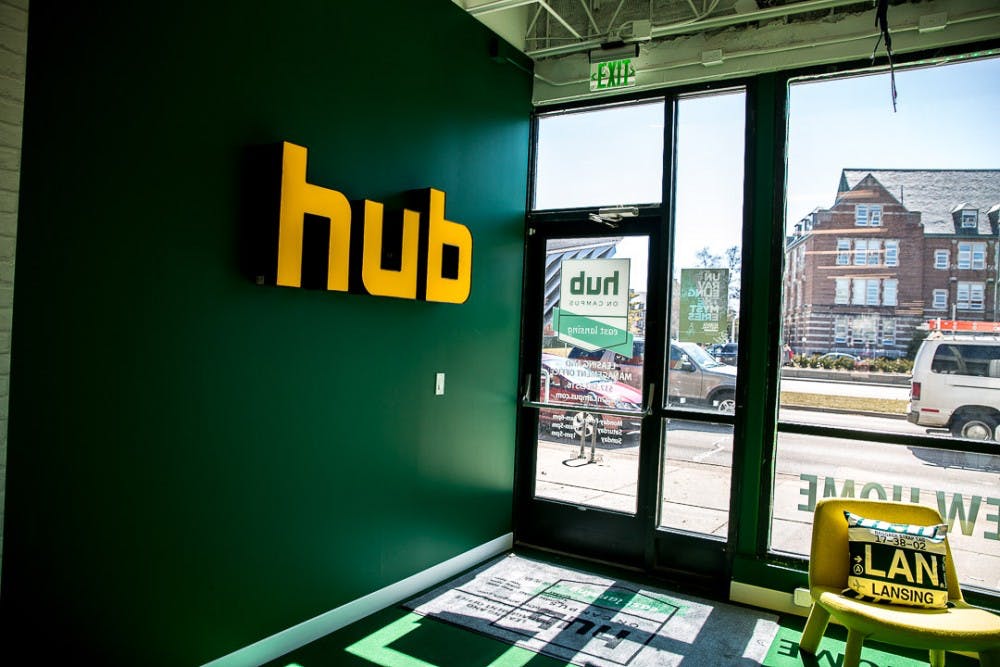 The interior of The Hub is pictured on March 25, 2019, in East Lansing. Sylvia Jarrus | The State News

A proposal from the developers of The Hub on Campus to build two student housing towers on Bogue Street faces delays as the city mulls an overhaul of East Village zoning laws.

David Pierson, an attorney for developer Core Spaces, said the company has acquired two parcels that encompass every fraternity on Bogue Street except for Farmhouse. Pierson said the properties are owned under contract, meaning Core Spaces won’t formally buy the properties unless the project can be approved.

The project's plans are not yet solidified.

“We haven’t seen or done anything yet,” Pierson said. “They haven’t started it because of the issue we’ve brought to you tonight.”

Core Spaces Chief Acquisitions Officer Andrew Wiedner said the project is a part of a push to reduce price-points of apartments. He said the three-bedroom units in The Hub on Campus sold in two weeks.

“In a lot of developments now, we’re doing five-bedroom and six-bedroom units,” he said. “I would love to do more. We think there’s an incredible demand.”

Core Spaces proposes either 155 feet or 14 stories for the buildings depending on how the stories are counted, Pierson said in his memo.

He said the East Lansing City Council should increase the current cap of 140 feet and — regardless of a height limit — eliminate the reference to stories when regulating developments.

The first floor also has specific requirements. Zoning laws require the first floor of every building to be 17 feet high. Along East Grand River Avenue, at least 75 percent of the floor must be used for retail or office uses.

“The 17-foot height requirement adds difficulty for any other use,” Pierson wrote in the memo to the city.

Planning and Zoning Administrator David Haywood said staff has a particular interest in changing the law regardless of the project, due to a conflict in the law between a requirement for mixed-market rentals and class B use. Class B buildings are dormitory-style housing, including sororities and fraternities.

Councilmember Aaron Stephens said his view was to think of changes to the zoning requirements independent of the project proposed.

“East Village is a very specific situation where we do have some changes that need to be made,” he said.

Stephens said he would like to see more student input on how the area should be handled by the city.

“I would love to get (Associated Students of Michigan State University's) input into this,” he said. “I think having the conversation about multiple bedrooms is a good one to have.”

Mayor Mark Meadows informed Stephens that he'd likely "have to wait until fall" for student input, as ASMSU has already held its last meeting of the semester and MSU's final exams are coming up.

Pierson said his timeline for approval of the ordinance was now slowed down, compared to his plans before the council meeting.

“What they said tonight — as I heard it — was, they want this (ordinance) to come back to them first,” he said.

Pierson said he hopes the council will send his proposed changes to the planning commission, which would then make a recommendation in May.