Into the weeds of East Lansing dispensary regulations 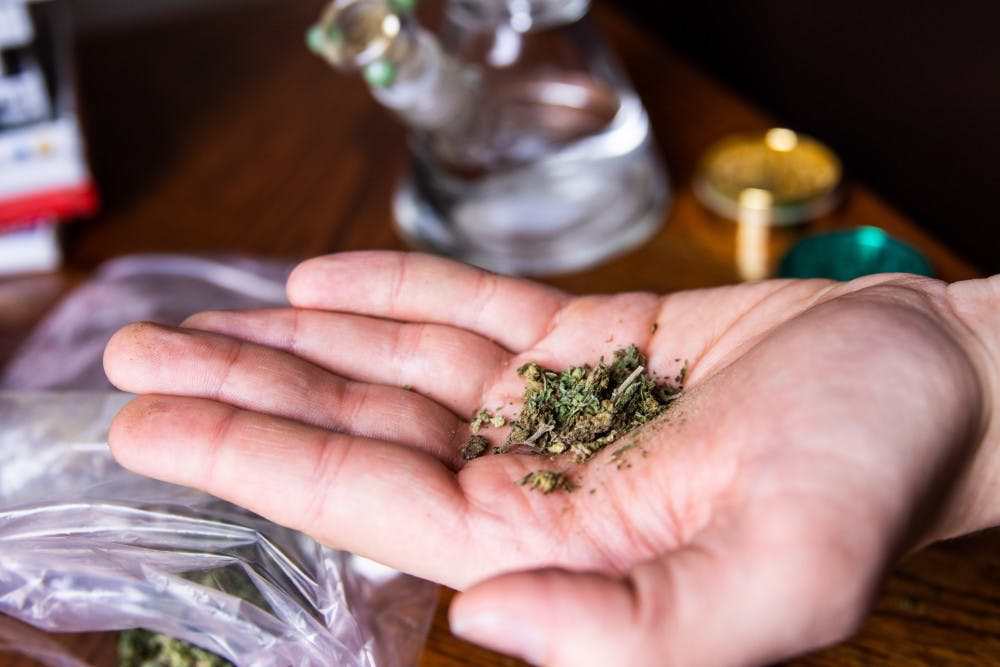 The East Lansing Planning Commission recommended the City Council overhaul its medical marijuana dispensary regulations, including lessening the separation between facilities from 1,000 feet to 500 feet and eliminating the required distance from liquor stores.

Under the city’s medical marijuana ordinance passed in November 2018, dispensaries are required to be separated by at least 1,000 feet from liquor stores and other dispensaries.

The rationale for the original proposal, according to the city staff report, was to maximize the value of city property on the southwest corner of Merritt Road and Park Lake Road.

“The proposed amendment would effectively permit two medical marijuana provisioning centers within the Merritt Road overlay district,” the report reads. “The amendment would substantially increase the value of city property and respond to the multiple interests in locating a provisioning center in the Merritt Road overlay district.”

Vice Chair Kathleen Boyle said the proposal missed the mark. She said it didn’t make sense to allow exceptions for the city’s benefit.

“The question here to me should not be, ‘Do we make the city property worth more money?’” Boyle said. “To me, the question is, ‘Do we want to maintain the separation that’s currently in the ordinance?’

“If you don’t need that separation, then I don’t think we should have it elsewhere in the city either,” she said.

“I am not okay with us changing the rules to make it advantageous for only us,” he said. “If we’re going to set rules, we’re going to follow those rules.”

Commissioner John Cahill said the exception proposal addressed “a symptom and not the problem,” saying the true problem is the 1,000-foot requirement, while Commissioner Chris Wolf was vocally against it as well.

“I’m almost ashamed to see this introduced,” he said. “I find it so objectionable to see what was done here.”

Wolf then proposed an amendment completely striking the new language and changing the universal separation distance from 1,000 feet to 500 feet. That amendment passed.

“I’m not sure where that will go with council, frankly,” Mayor Mark Meadows said after the meeting.

Commissioner Dale Downes said the 1,000-foot requirement was in place to address traffic and parking concerns for dispensaries looking to open on Grand River Avenue.

But Wolf said after analyzing the mapping data, the effects on downtown traffic would be minimal.

“My conclusion is it would allow only one more provisioning center,” he said.

An application for 1234 E. Grand River Ave. is between 500 and 1,000 feet of other applicants. This would prevent its establishment under current regulations, but permit it under the planning commission’s recommendations.

Michigan Avenue and West Road — two other streets where applicants are seeking to open dispensaries — don’t have additional available properties between 500 and 1,000 feet from the original applications, Wolf said. This means a change in separation distance wouldn’t spur an excess number of dispensaries.

The commission passed an additional recommendation to eliminate the required distance from liquor stores.

Cahill said he was wary of the current regulations because of potential legal battles resulting from increased competition.

“How’s that all going to get sorted out other than in court? I think we’re just asking for trouble,” he said.

“You’re just giving someone some weapon that they can use in what I think will be a fiasco going forward,” Cahill said. “People are playing around with liquor licenses and trying to rig the system because of that.”

Wolf said he agreed, but didn’t want to go too far in the commission’s recommendation to City Council. He said reducing the separation distances would achieve a minimal impact and provide the city with an increased value on their property.

Stephens said it made sense that the planning commission made recommendations on separation distances that would be applied universally.

“If we can’t even follow those rules, then there’s probably something wrong with the rules,” he said.