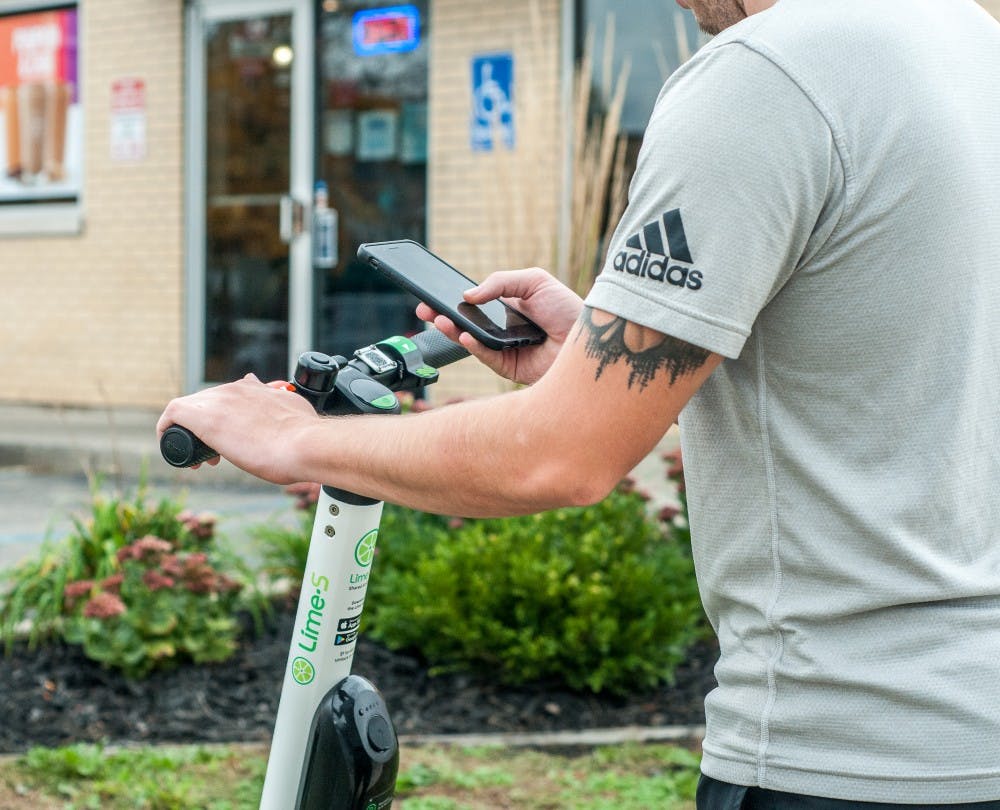 East Lansing officials are considering increased regulations on electric scooter companies — including licensing agreements, a downtown speed limit, per-ride fees and a curfew — which could impact riders before the scooters make their return in the spring.

The East Lansing City Council is generally supportive of the scooters in the city, councilmember Shanna Draheim said. However, laws need to be established that meet safety, reckless parking and license management concerns.

One option would be to impose a $5,000 annual permit fee per company. Another would be a 10-cent fee per ride, which may be passed on to riders at the company's discretion. Draheim said it's unlikely that the council will impose both fees.

If the per-ride fee option is chosen, it would be imposed regardless of the ride's distance, she said. Funding generated would be used within the program established by the ordinance, according to Draheim.

“They can’t just go to the general fund to pay for other services,” she said.

Draheim said that it was her view that funds could be used for bike and scooter infrastructure such as bike lanes or parking zones.

The city's "skin in the game is infrastructure and creating these safe, low-stress places for people to ride,” he said.

The largest concern for the city is pedestrian safety, Draheim said. One problem the Transportation Commission sought to address at its Feb. 4 meeting was widespread scooter use on sidewalks, and commissioners considered banning scooters from the sidewalk entirely.

Commission chair Thomas Baumann advised against banning scooter use on sidewalks, especially if a 10 mph scooter speed limit is established in the Downtown Development Authority district between Abbot Road and Charles Street.

“We feel strongly that we have to put in some measure into the ordinance that makes it safer for pedestrians,” but a sidewalk ban "doesn't make sense," Baumann said.

Baumann proposed a requirement that scooters on sidewalks do not exceed pedestrian speed, utilizing similar language to the city's regulation of bicycles on sidewalks.

The commission also agreed on the benefits of banning rides from 11 p.m. to 5 or 6 a.m.

Enforcement of the new rules would likely come from the city's police department and Parking and Code Enforcement, according to Draheim. The commission hopes to find an incentive for users to comply with safety regulations.

“With a scooter it could be sanctions,” Baumann said. “Let’s say for instance, you get a ticket and the scooter company knows about that because of info-sharing. They could ban you from using the scooter.”

Mullen said Lime educates its users about best practices to avoid safety hazards and already provides the city with data about the number of riders and trips, the average trip distance and a heat map of where people are riding.

"We start with education, but if we see a pattern of negative behavior, we can restrict access," he said.

Lansing’s draft ordinance regarding scooters has served as a reference point for East Lansing's planned regulatory language. Draheim said other cities’ regulations have been useful for crafting legislation as well.

Mullen isn't sure when the ordinance will be passed, but shares Draheim's hope of finalizing an agreement by early spring. He said Lime plans to continue talks with the city later this week to iron out some more specifics.

There's pressure on the city to decide on regulations before warm weather returns and residents look to ride again, Draheim said.

“The sense of urgency is just the timing of (the scooters) coming back,” Draheim said. “That’ll take another month to six weeks, and then we’ll be bumping right up against spring.”