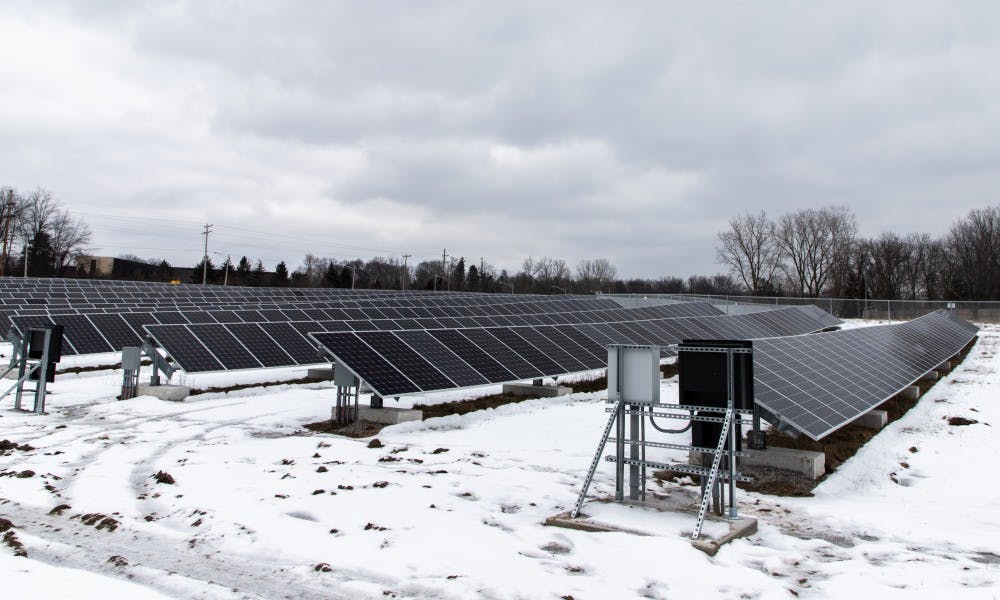 Pictured are some solar panels photographed at the East Lansing Solar Park on Jan. 24, 2019 at Burcham Park in East Lansing. CJ Weiss | The State News

Presentations on potential sustainability strategies from the East Lansing Commission on the Environment and the Lansing Board of Water and Light, or BWL, made up what Mayor Mark Meadows called the East Lansing City Council’s “environmental evening.”

“We have political will, we have resident will and we have staff will,” she said. “When you have those three things together, there’s not a lot that we can’t do.”

Two years ago, East Lansing was one of 10 communities to participate in two-week online “Resilience Dialogues" with climate experts, which discussed strategies for climate adaptation. Experts included officials from the National Oceanic and Atmospheric Administration, the Environmental Protection Agency, the Federal Emergency Management Agency and other federal agencies.

“It was pretty amazing to be connected with these folks and to be able to talk with them,” DeShambo said.

DeShambo also presented to the council East Lansing’s gold certification in the Michigan Green Communities Challenge. The certification required actions such as tracking local energy and water use, incorporating sustainability metrics in city improvements and a community forestry plan.

“This was actually a particularly heavy lift, but it was great because it really gave us some benchmarking,” she said.

The city has been a strong participant in regional recycling — although the region does not have a materials recovery facility, a development the commission has been working on for years, Deshambo said.

“All of our recyclables must be trucked elsewhere,” she said. That really equates to a loss of jobs in our community and a loss of economy.”

DeShambo said a recovery facility, supported by an agreement between the City of Lansing and the City of East Lansing, is coming to fruition. A version of the agreement was previously recommended to the East Lansing City Council in 2015.

Environmental commission chair Tom Alwin spoke to the council about the commission’s renewable energy subcommittee, saying its first task is to develop and approve an ordinance to reduce the city’s electricity footprint. He said a specific resolution would be to council in the spring.

The commission is strongly leaning toward a blended energy efficiency approach — both through purchasing green energy and increasing green energy production, Alwin said. But one obstacle is that the city doesn’t produce its own energy.

Mayor Pro Tem Erik Altmann said he was against purchasing outside green energy.

“If we invest in our own green infrastructure, then those dividends will ultimately come back to the city,” Altmann said. “If we purchase green energy, it’s money out the door.”

BWL General Manager Dick Peffley spoke to the scope of the city’s investment to reach 100 percent renewable energy by 2030.

An annual investment of $228,000 is required for East Lansing to reach total dependence on renewable energy, which amounts to a 7.8% increase in the city’s electric bill, Peffley said. One way to achieve the renewable energy goal would be to add the city to BWL’s Greenwise Power Planavailable to any resident or community, he said.

BWL would entertain a partnership with the city on solar energy development, Peffley said.

“This is not in the future, this is right here, right now in front of us,” he said.

Meadows said the city’s most likely annual investment would be about $100,000.

“We have a strategic priority that says we need to move to 100% renewable energy in all of our city operations,” Meadows said. “This is just one element of what we should be taking a look at.”