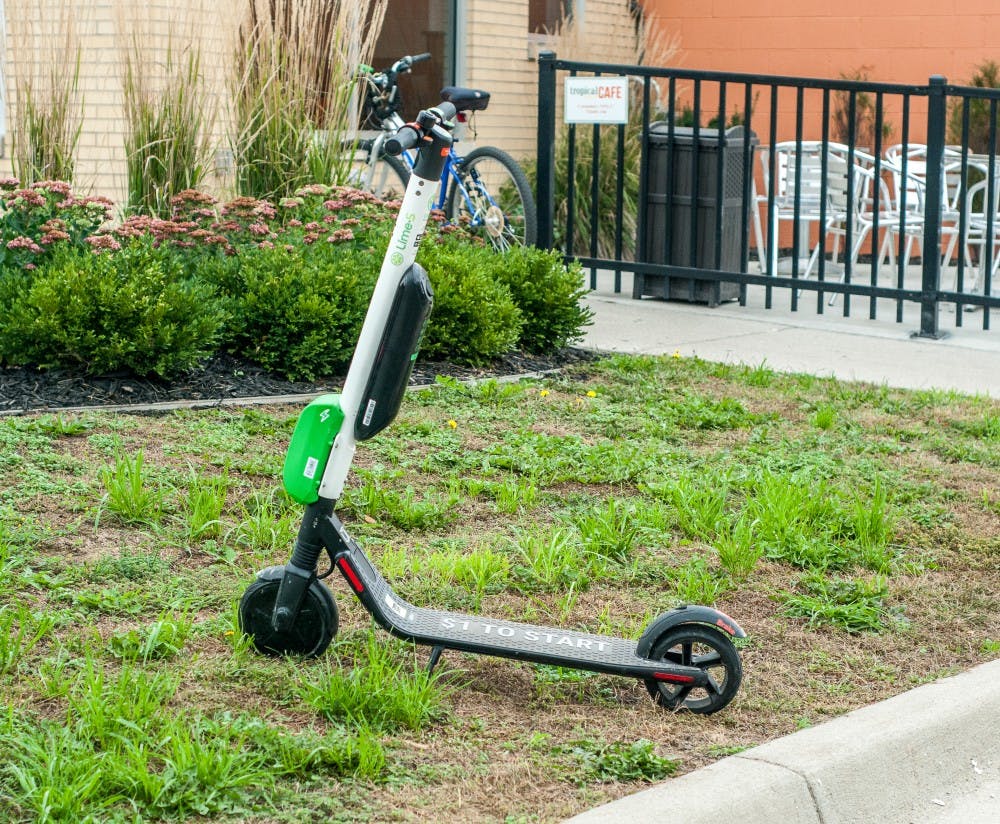 A Lime scooter is pictured parked next to the sidewalk on Grand River Ave. CJ Weiss | The State News

The companies must pay the city an annual $2,500 fee, a daily 10-cent fee for every ride that begins within city limits, and a $100 fee for each month an electric scooter remains impounded. The ordinance goes into effect March 20.

Councilmember Shanna Draheim amended the ordinance to ensure revenue generated from the scooters is used for scooter infrastructure.

“This isn’t generalized revenue that is coming in,” she said. “This is very specific to operation of new modes of mobility in our city.”

The council established a speed limit of 10 mph on sidewalks.

“If you’ve ever ridden anything on the sidewalk faster than 10 miles an hour, it’s just not safe,” Councilmember Ruth Beier said.

East Lansing Police Department Chief Larry Sparkes said speed limits would be difficult to enforce, since the department’s radar units are “not really designed” to pick up the speed of vehicles as small as scooters. He said the council should focus on public education for best practices for riding the scooters.

The ordinance requires companies to provide education plans for users about pedestrian rights, including those with disabilities, so they can continue to travel unimpeded by scooters.

Representatives from scooter companies Lime and Birdprovided input to the council. Both sought a lower per-ride fee of 5 cents, but the council lowered its original plans for an annual fee from $5,000 to $2,500 instead.

Scooters will be allowed to stay within the city during the winter months. Mayor Pro Tem Erik Altmann amended the ordinance to eliminate a provision calling for the removal of scooters from Dec. 15 to March 15 each year.

Companies must still remove the scooters when weather conditions require the city to plow and maintain roads and sidewalks.

Removal is also required between 3 and 6 a.m. each day. Altmann moved to eliminate that requirement as well, but it failed by a 2-2 vote.

“I don’t see a reason to do this and there may be people who use them during these hours,” Altmann said.

Lime’s Director of Northeast Expansion Scott Mullen said in a statement to the council that the company has third-shift workers to provide services for late-night scooter users.

Mayor Mark Meadows said he didn’t support Altmann’s amendment because the Department of Public Worksneeds the ability to work during that time unimpeded by scooters.

Companies are required to respond to requests regarding scooters blocking parking spaces or the public right of way, as well as unsafe or inoperable scooters.

Meadows amended the ordinance to grant authority to the city manager to designate appropriate parking rules for users. Altmann said one example of this authority would be to prohibit parking within 10 feet of a business.

“I think that’s important that we give that authority to the city manager,” Meadows said.

The city manager could establish additional rules through an administrative order, which would require council approval.