E.L. policy affects students, too — here's how to get involved 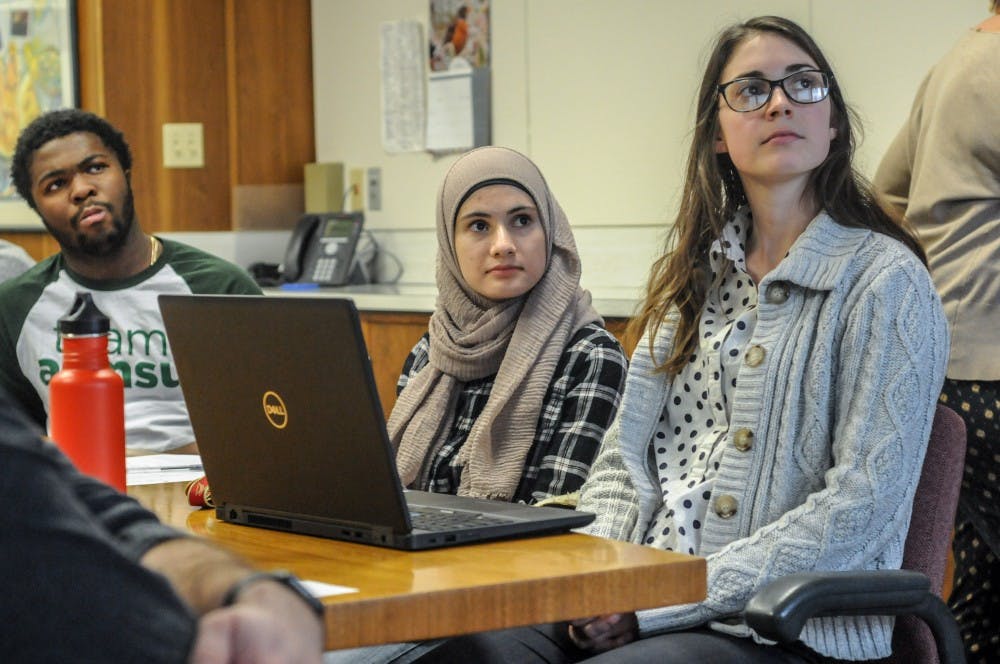 Members of the University Student Commission listen to a presentation at East Lansing City Hall on April 2, 2019. Annie Barker | The State News

“The purest form of government is your local government,” according to East Lansing City Councilmember Aaron Stephens.

“I ran as a student because all of these issues affect students every single day,” said Stephens, who was elected in 2017 as a political science senior at MSU.

There are multiple ways MSU students can get involved and shape city policy.

Serving on the University Student Commission...

There can often appear to be a wide gap between students and city officials, said Inter-Fraternity Council vice president Don Nguyen. The University Student Commission is intended to bridge that divide.

The commission includes representatives from major student bodies on campus like the National Panhellenic Council, ASMSU, Olin Health Center and the Inter-Cooperative Council in addition to the Inter-Fraternity Council.

“Realistically, anybody can apply to be a part of this University Student Commission,” Nguyen said.

He said he was taken aback by how cooperative the city has been in responding to student concerns.

“They have been very communicative and very transparent with us,” Nguyen said. “Everything is done in our best interest.”

The student commission helps guide city policy, with a recent example being the process of hashing out electric scooter regulations, Nguyen said.

“If we didn’t say anything, the city may not have ever approved scooters to be in the area,” he said.

Getting involved with the commission from a student’s perspective is as easy as showing up. These meetings include reserved time for public comment, where any audience member can speak to any issue whether it's on the meeting agenda or not.

...or any other commission

“On my commissions, I always want to have a student,” Stephens said.

He said every commission has a role in city government, as they all give recommendations to city council on a variety of topics.

A list of commission vacancies is available on the city website. Students are eligible to apply for any vacancy, regardless of how long they plan to stay on campus.

Stephens said awareness of the opportunities to serve on city commissions is beneficial for the relationships between students and the city.

Cultivating student and city relationships is an issue East Lansing and MSU have collaborated on before.

The Community Relations Coalition, or CRC, was established as a response to the 1999 riots, according to University Student Commission Chair Dillon Frechen. He said the body worked to resolve tensions between permanent East Lansing residents and MSU students.

The CRC assisted with events like ice cream socials to increase awareness among students and residents about who their fellow city neighbors.

Former CRC member Sadie Shattuck said students in the coalition were often the only ones at these neighborhood events, as was the case for her in the Bailey neighborhood.

“I’m the only student. I’m representing those 8,000 students in that neighborhood,” Shattuck said.

Frechen said ideally, five to 10 students would be present at any given neighborhood meeting to discuss issues like parking laws that impact students' daily lives.

The CRC was cut from the city’s budget last year due to a lack of revenue, and MSU cut its funding soon after. Frechen said the timing of the cuts was beneficial because the organization was ripe for change.

"While we’ve seen some riots since '99, they’ve been nowhere near the scope and scale of that,” he said.

The CRC is currently being rebranded and redeveloped as the Community Relations Partners, a registered student organization at MSU. The goal of engaged community involvement is the same, but the new organization aims for a wider scope.

He said in the past it was a way to soften residents' perceptions of students with a sole focus on East Lansing. Frechen said the idea with the realignment is not to spend less time with residents, but to spend more time with students.

“It’s going to look different going forward — it has to,” Frechen said. “The CRC being gone is a bummer, but it’s also an opportunity for change."

Shattuck hopes the rebranding effort can make the organization more inclusive of students who live outside of the city of East Lansing and in locales like Lansing, Meridian Township and Bath Township.

“We can not just focus on students of East Lansing, but the surrounding areas as well,”  Shattuck said.