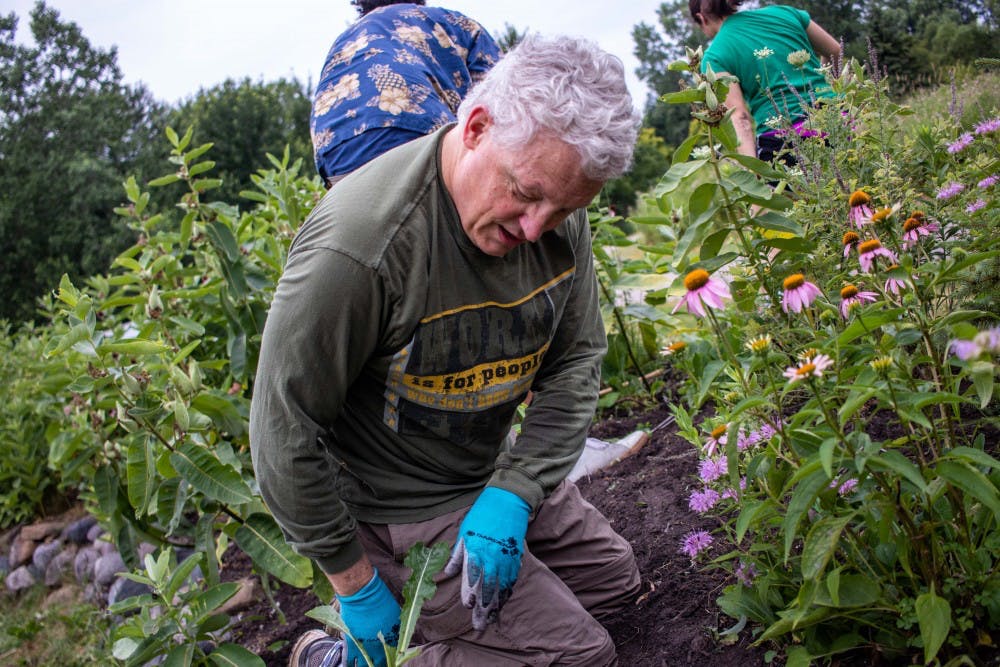 Peter DeGuire tosses a weed away from the garden in Harrison Meadows Park on July 14, 2018. Volunteers were at the park in the morning removing weeds and invasive species from the garden, which is made to be butterfly-friendly. Matt Schmucker | The State News

The updates will go into effect from 2020 to 2024 and the plan will serve as a guiding document for the department’s goals through that period. A second public input session will be held March 7 at 6:30 p.m. at the Hannah Community Center.

At the meeting, assistant parks department director Wendy Wilmers-Longpre asked residents what existing city programs and features they liked within each focus area, what opportunities for growth they think exist and what they hoped to see in the future.

Jury said he wanted East Lansing's trails to be a greater connection point both within the city and with neighboring Lansing.

The most logical option for that connection with Lansing, according to Wilmers-Longpre, is extending the Northern Tier Trail further south, to meet with the Lansing River Trail.

“I think if you connected the southernmost part of the (Northern Tier) trail to campus, you can get on the trail on campus and head west (to Lansing) from there,” Jury said.

Opportunities also exist for a connection further north, as a project to extend Coleman Road gets underway.

Michael Townley, an engineer with the Michigan Department of Transportation, agrees that connecting the River Trail is likely the best option.

East Lansing parks department director Tim McCaffrey has had discussions with his counterparts in Lansing, and he said further cooperation with those departments would be needed to connect the trails and the two cities.

McCaffrey said he was receptive to the idea of expanding the trail — if there's money for it. He said the parks department does have access to funds from the Ingham County Trails and Parks Millage, which allow for trail maintenance and expansion.

Click here for a map of the Lansing River Trail (marked with a blue pinpoint) and the East Lansing Northern Tier Trail (to the northeast of the River Trail).

"I like the fact that a historic building was repurposed in this fashion," he said.

Jury said one way to resolve the issues surrounding the center was by "getting creative with revenue streams" to keep the building open and to bring the unused third floor of the center up to code.

“It’s kind of a shame that the entire building isn’t being used,” he said.

Nicholas Wright, a senior business analyst with the state's Department of Technology, said residents desperately want the facility to remain open after scares that it would soon be closed as the city faces a continuing budget crisis.

Some residents said they enjoyed the available amenities at Patriarche Park, but others believe additional improvements could still be made to the park.

The city has made continued improvements to improve Patriarche Park, in part through state grant funding.

Townley said beyond Patriarche Park, neighborhood parks with with old and rusty equipment are a starting point for the department to continue improvements.

Townley said he liked events in the downtown area that draw more people to that setting.

Jury said he wondered if there a way to maybe take smaller events to engage other clubs or groups in the city as a move to bring more people to the events.

One concern that Wilmers-Longpre addressed was the resident turnout for senior events hosted by the Hannah Community Center.

Jury said some programs are too much commitment for the city's busy residents.

“I don’t know how many people have the ability to sign up for six- or eight-week classes that could be offered," he said.

Townley said one city offering he enjoys is the environmental stewardship program.

The second public input meeting will take place on March 7, where city officials will ask the public for similar thoughts on their priorities.

"We want to make sure that everything that we do as a parks and recreation department is consistent with the city's strategic priorities," McCaffrey said.