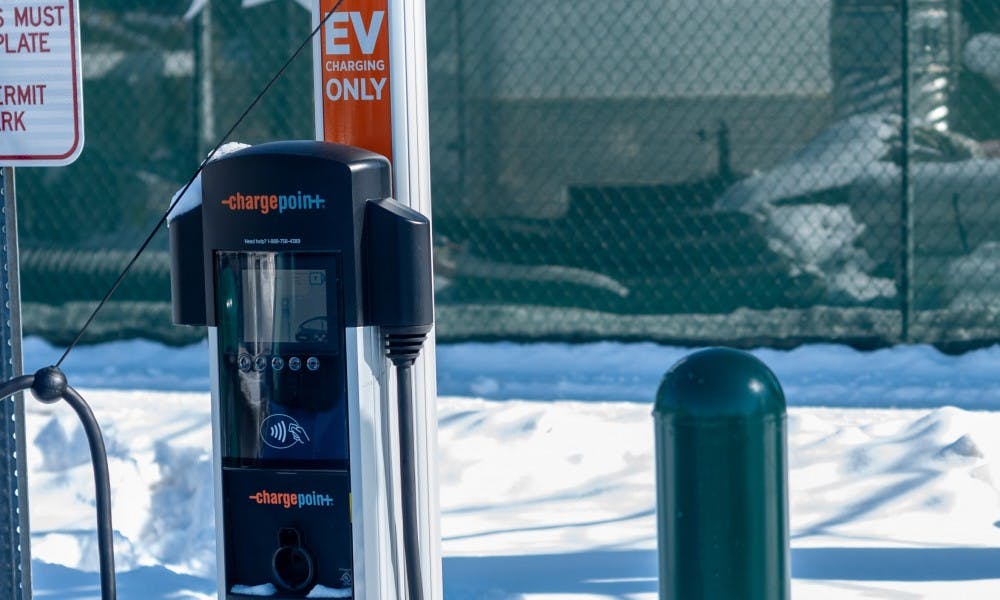 An ordinance to establish requirements for electric vehicle, or EV, charging stations for parking structures at new developments in East Lansing is now headed to the City Council.

The ordinance, recommended by the East Lansing Planning Commission at its Feb. 13 meeting, would require non-residential and combined commercial-residential properties to provide one level-two or better EV charger for every 50 parking spaces provided.

Will they be used?

According to Auburn Hills' electric vehicle infrastructure ordinance, Chrysler, General Motors and Nissan predicted that by 2020, EV sales would reach 10 percent of all vehicle sales.

Commissioner Chris Wolf said while 2018 was the biggest year for EVs, those three companies hadn't come close to their prediction — only 1 percent of total vehicle sales were EVs.

The city’s M.A.C. Avenue garage used approximately $330 in electricity this past year, according to the staff report for the ordinance, which Wolf said amounted to about six hours of use per week. He said that wasn't much use at all.

“Things are changing, but they’ve still got a long ways to go,” he said.

Kathy Swedlow, an EV owner and East Lansing resident, spoke in support of the proposed ordinance at the beginning of the meeting.

“When you have an EV, not everybody can still charge at home,” she said.

City Manager George Lahanas supported the ordinance proposal because of the increasing prevalence of electric vehicles. Eventually, gas station equivalents for electric vehicle chargers will need to be constructed in the city, he said.

“This (ordinance) alone won’t be enough to take care of the future of electric vehicles,” Lahanas said.

Commissioner Wolf said he was uncomfortable with the proposal because of the burden on individual businesses. He recommended the ordinance only after his proposed amendment passed to remove the requirement on businesses.

“I would much rather let the market determine where this goes,” he said.

Mayor Mark Meadows disagreed on the ability of the market to make charging stations commercially viable.

“That’s a nice thought, but we’ve seen in the past that every time we seem to expect that, it takes four times as long,” he said.

Swedlow said one advantage of the ordinance as it stands is that people who park their cars to charge would be encouraged to shop at businesses downtown.

“I do shopping I never would have done before buying this car,” she said.

Meadows said because of the stations' proximity to shopping areas, there would be less pushback from local businesses in complying with the ordinance.

Wolf's amendment, which was approved in the meeting, exempted non-residential properties from providing charging stations and clarified a few other exemptions.

Exemptions apply if developers can prove a low likelihood of the station's use, if the expense would be cost-prohibitive to the development, or if the charging station mandate would constitute a "regulatory taking" as defined by law.

Another issue, according to the staff report, is compliance with the Americans with Disabilities Act.

“(The Michigan Department of Natural Resources and the Michigan Agency for Energy) are beginning to believe that one EV parking space should accommodate one ADA-compliant space,” the report said.

After discussion with a planner from the Tri-County Regional Planning Commission, City Councilmember Shanna Draheim also recommended upping the requirement to two charging stations per 50 spaces, according to the report.