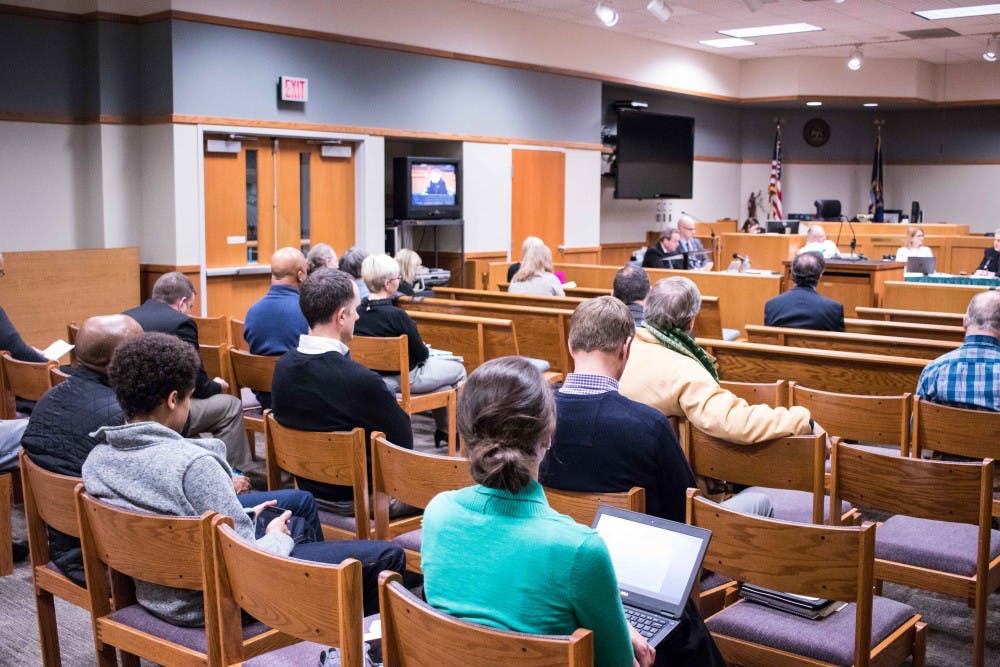 The crowd of citizens sits through the city council meeting on Jan. 9, 2018, at the East Lansing City Hall. The councilmembers spoke about topics including the upcoming MLK Jr. Day holiday. Matt Schmucker | The State News

Councilmembers discussed a draft ordinance to regulate electric scooters, or "skateboards" as the ordinance refers to them.

The city's Transportation Commission also sent a letter of their recommendations regarding the ordinance following its Feb. 4 meeting.

The ordinance would levy two fees on scooter companies: An annual $5,000 fee for companies that provide scooters and a per-ride fee for each scooter within city limits. The per-ride fee would be ten cents for the first year, with opportunities for adjustment through the city council’s budget process in following years.

The ordinance creates a 10 mph speed limit in the downtown area and bans scooter use on sidewalks.

Mayor Mark Meadows did not support those provisions, taking a similar stance to the recommendations from the Transportation Commission.

“There’s no way to actually enforce any such regulation,” he said. “I would rather see us emphasize that pedestrians have the right of way.”

City Manager George Lahanas said that Michigan State seems serious about seeking an agreement with a single scooter company for on-campus use.

The implication for East Lansing is that if a company is both licensed in the city and the sole provider for MSU, the company would have a distinct advantage, Lahanas said.

“We are not in a position where we can just pick one provider, but they can," he said. “We’re both still in the formulation stage, and they’re taking a slightly different approach from us.”

Lahanas said it would be interesting to the impact of see MSU's potentially exclusive provider on the city, since scooters are most often used in the downtown area and on campus.

“Going back and forth between the city and the campus is going to be a regular occurrence for people,” he said.

Meadows recommended the ordinance be enacted before March 15.

The ordinance requires companies to remove the scooters by 11 p.m. each day, between Dec. 15 and March 15 of each year and whenever weather conditions would make their use unsafe.

Mayor Pro Tem Erik Altmann said enforcing those provisions could be a hassle for the city.

"That’s just not something I want to get into regulating,” Altmann said. “I don’t know that we have the expertise to do that.”

The city council discussed the budget and its five-year forecast for 2020 through 2024.

Lahanas and finance director Jill Feldpausch presented the long-term financial forecast for fiscal years 2020–2024. The forecast projects revenue will grow from 1.7 to 3.6 percent over that period.

The income tax is expected to bring in $10 million in total, $5 million of which will be used to compensate for the imbalance between property tax value increases and taxes the city is actually allowed to collect. One million dollars will go to public safety.

However, until the city receives revenue data and compliance rates on the income tax, expected revenues remain uncertain.

“This number is scary to me, because it’s an unknown,” Fledpausch said.

Equally uncertain is the status of P.A. 289 fire protection funds from the state government, which could provide an additional $1.6 million. The true amount will be determined through the state appropriations process.

Personnel costs are the largest expense for the city, and the first full year of recently passed legislation may increase those. The Legislature passed a bill in 2017 requiring cities like East Lansing with underfunded pension liabilities to pre-fund retiree healthcare for newly hired employees.

“This year was pretty tough,” Feldpausch said. “But I will say this has been the prettiest forecast I’ve seen.”

The Public Works & Environmental Services department and the Parks, Recreations & Arts Department presented their plans for improvements to the city.

McCaffrey spoke on current projects including improvements to the Northern Tier Trail and the East Lansing Softball Complex, as well as long-term goals to improve the Hannah Community Center and neighborhood parks.

The parks and recreation department hosted one public input meeting this month, and has another scheduled for 6:30 p.m., March 7, at the Hannah Community Center.

One project scheduled for 2020, to improve the sidewalk on Coolidge Road, is a joint undertaking with the city of Lansing, House said. He said there are significant gaps of sidewalk access on that road between the cities which need to be addressed.